Throughout this website, you’ll find art done by my good friend Tony Brandl AKA The Rabbit Hero. A major turning point in his artistic career and, I would argue, his personal development came in 2007 when he completed his thesis for his interdisciplinary masters degree at University of Wisconsin-Milwaukee, a wonderful multi-media piece entitled “The Trevails of Chapman,” now available for public view on his Facebook page. It’s a story told through artifacts and fragments of a wanderer named Chapman, his adventures in the mythic land of Peripataea, and the myths that sprang up following his time there. Both the techniques and the mythology are foundational for the work he’s done since then, and over the past nine years Tony has more or less transformed himself into his own character of Chapman as he wanders throughout the U.S. peddling his wares at renaissance faire after renaissance faire.

One of the ideas Tony explored in “The Trevails of Chapman” is the communal nature of art. As part of that, Tony invited a few friends, myself included, to contribute or collaborate on chunks of the work. One person made an original comic for the work (included on Tony’s Facebook page), his friend Amanda created an interpretative dance for the formal thesis presentation, I think someone recorded original music to go with the dance, and I worked with Tony on a script fragment (the work as a whole is an assemblage of fragments that suggest but does not overtly tell a narrative). This was right after my daughter was born, so memories of the composition process are hazy, written during naps and between diaper changes. It started with Tony giving me I believe two scenes–the scenes involving Chapman, Maybridge, and the various tramps–and then me embellishing and expanding on those (I know that the dialects and the Polite Tramp’s malapropisms were my contribution) and adding the scene with the King (I think, although that might again have been something started by Tony and then expanded on by me) and the scene with the “Dark Man” (an idea that Tony decided to run with and added to the journal that forms the bulk of his thesis). Because it’s supposed to be part of a foreign theatrical tradition, I created a byzantine set of rules and forms that I only half-remember regarding scene notation, fonts, ink colors (questions are always supposed to be in red and Chapman’s dialogue is always supposed to be in green except when he’s asking a question are two rules I remember). Working on it was good, goony fun and I’m quite pleased with the end result, which is below.

Because “Trevails” is supposed to be a set of found artifacts, I decided that the “Heraclitian Man” (the title was my addition) fragment would be annotated script pages with production notes from an early performance and a weathered playbill. To give them that lived-in look, I nailed the playbill to a board and left it out in the sun and rain for a few days. Script pages got splashed with coffee, smeared with food, and flicked with pipe ash before going through a clothes dryer for a few cycles and then getting folded up with the playbill and riding around in my back pocket for a week or two. The last names of the players are taken right from Shakespeare’s theatrical troupe (which is why I decided to post this on the 400th anniversary of his death) and the playwrights referenced in the production notes–Jean and Antonio–are pretty obvious references to me and Tony. And so, without further ado, I present a fragment from the lost Peripataean play “The Heraclitian Man”: 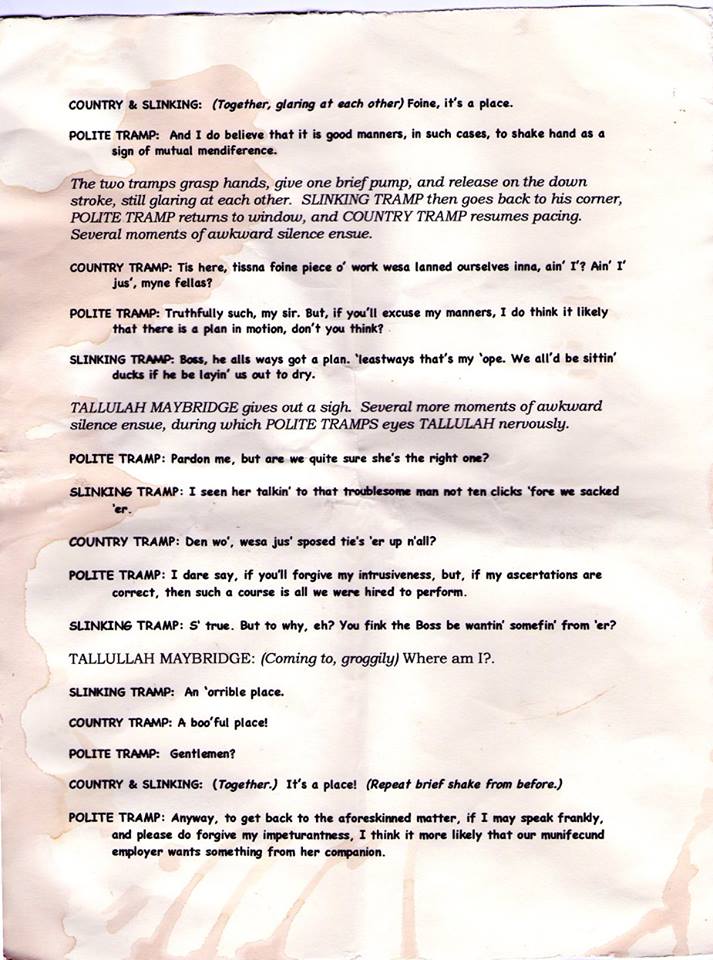 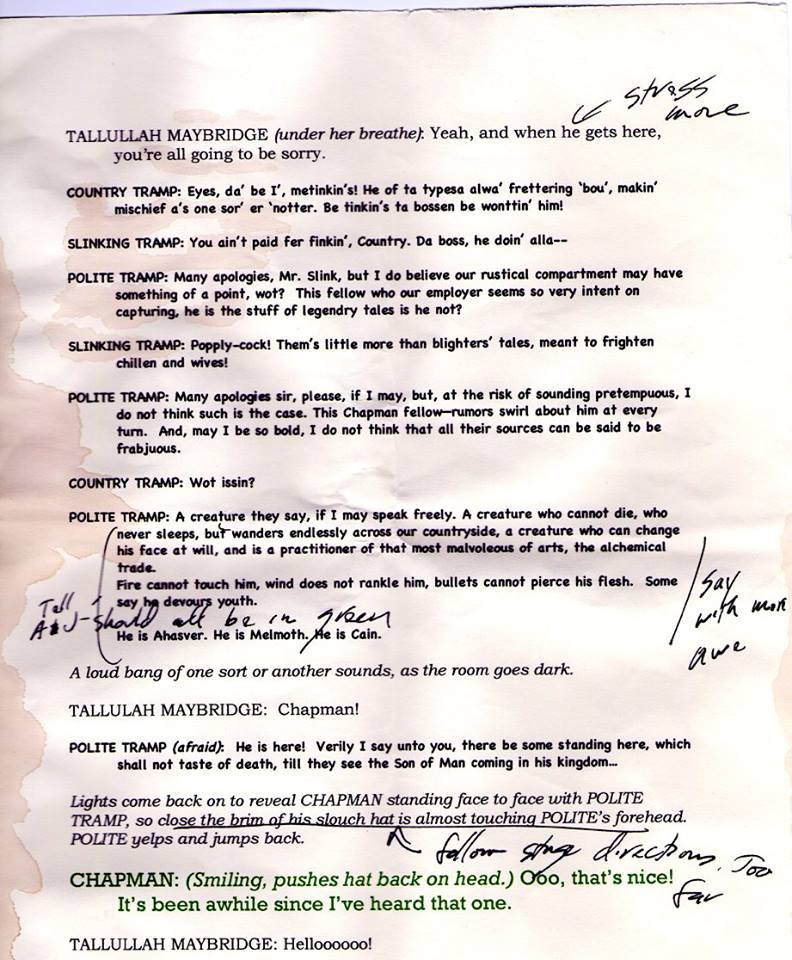 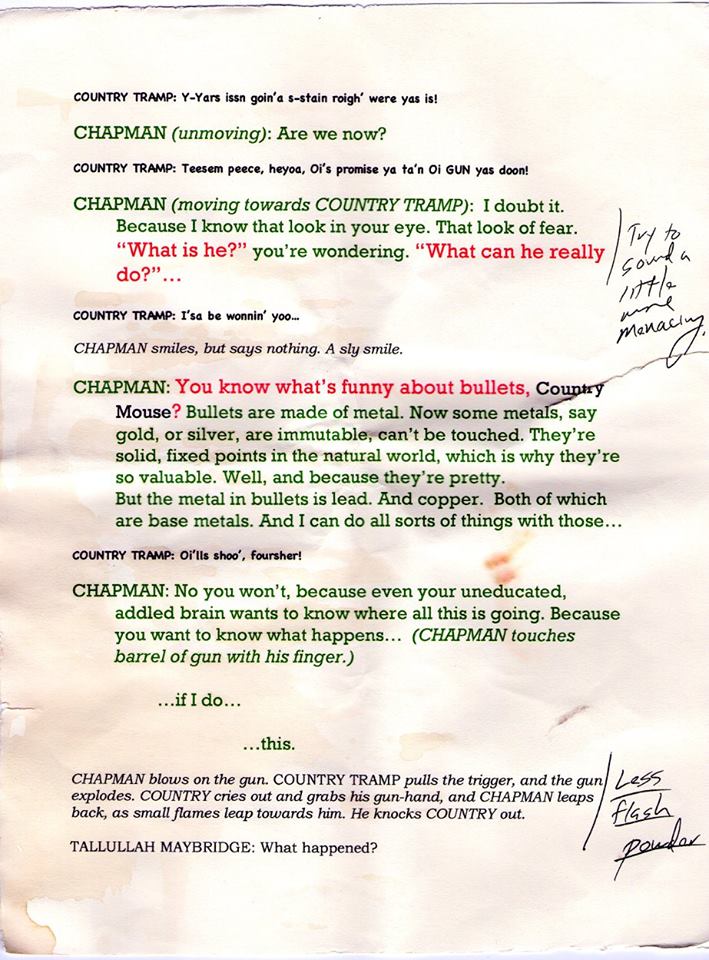 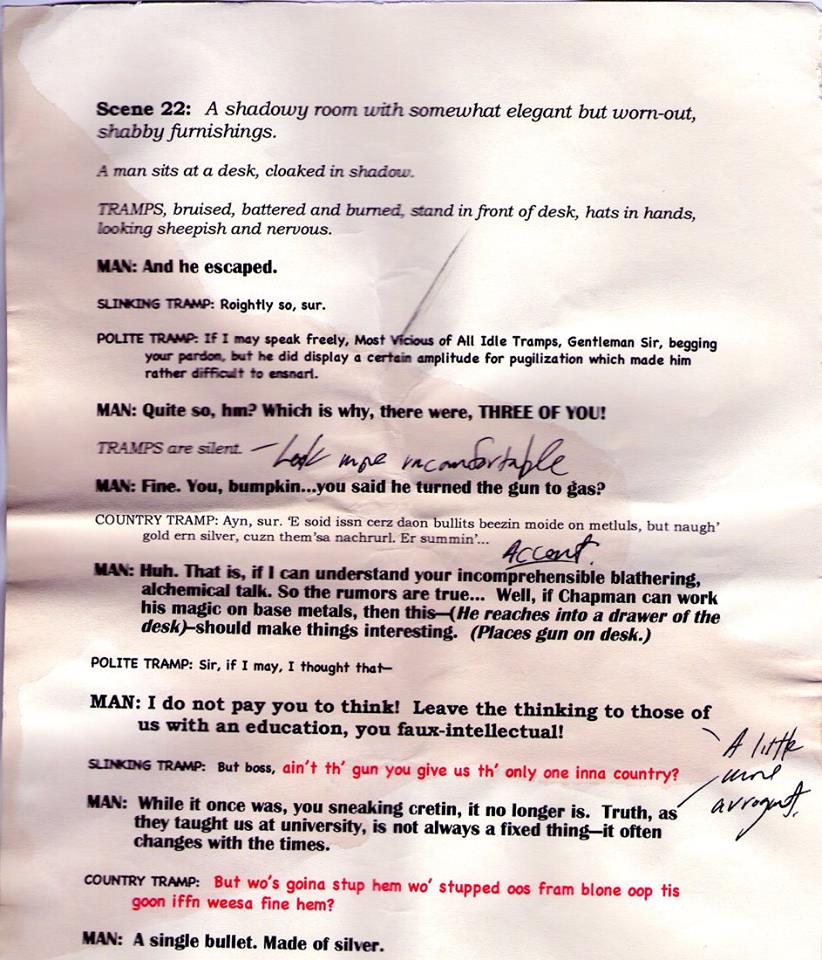 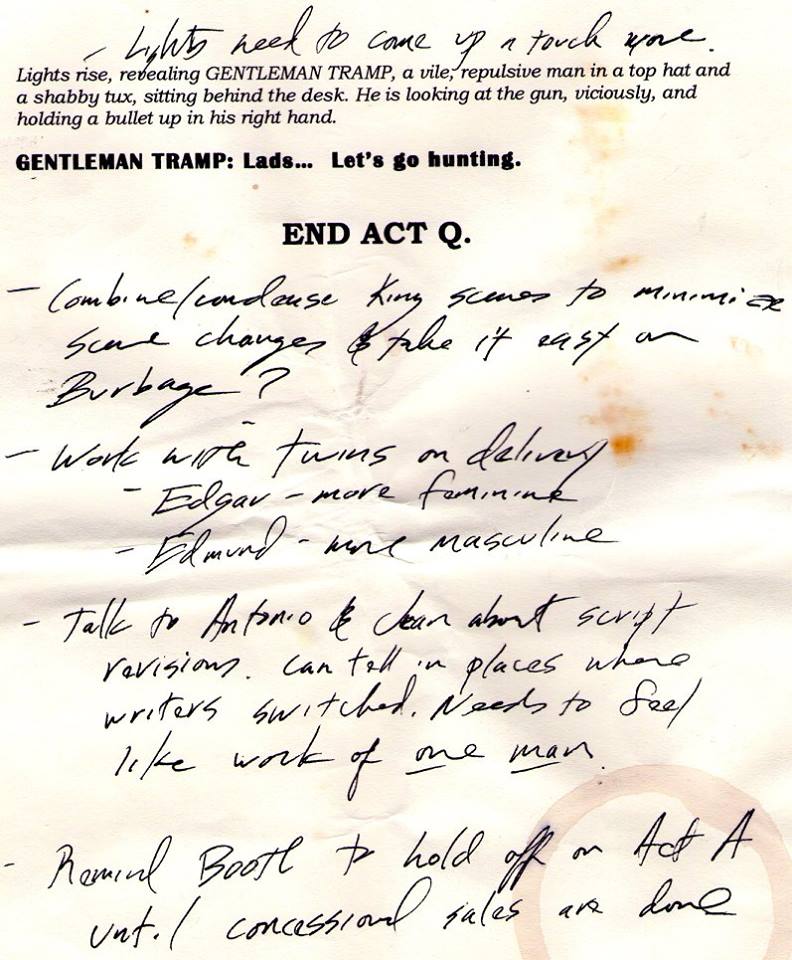