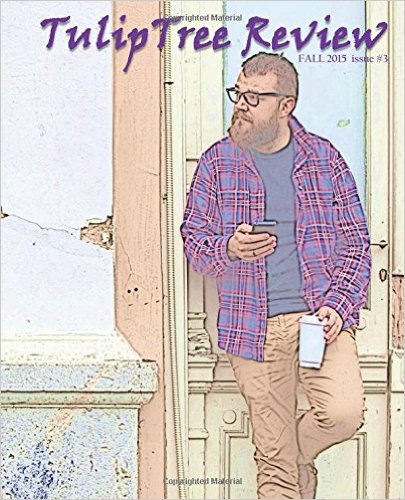 My story “Watching” just came out in the Fall 2015 issue of Tulip Tree Review, a story whose first draft was written almost 20 years ago for my Advanced Creative Writing: Prose class back at Illinois State University, which was taught by David Foster Wallace immediately before the publication of Infinite Jest (I remember him talking about looking through the galley proofs for the book he had coming out).

A few years ago, I decided to revisit the story (originally entitled “Peepshow”) that Wallace wrote, and I quote from his written critique, “is a seriously good central idea for a character and a story” but “for the most part isn’t working as well as it deserves to…” At that point, he wrote at length about every way that the story wasn’t working. And he was right, so I chucked almost everything from that first draft and started over. After a year of occasional tinkering, I finally had a structure that I thought worked and then set it aside to focus on teaching and parenting. Another year or two passed, and I got the itch to work on it again and finally got it into decent shape and sent it off for publication. After a six month wait, it got rejected. Feeling overwhelmed with the school year, I let it sit until the following summer, tweaked it a little, and sent it off again to just one magazine. Same thing–long wait, rejection, “screw it, I’ll do something when I’m less busy.” And so the story just sat there rotting on the vine.

Last summer was the turning point. I sat down, gave it one last round of spit-polish, and  found a bunch of quality magazines and journals that didn’t require “exclusive” submissions, which I think is a much more fair and charitable way of doing business. And a month later, the wonderful Jennifer Top, editor-in-chief of Tulip Tree Review, finally offered my little story a home, for which I am extremely grateful.

A lot’s been said about how great of a writer we lost when he committed suicide–and we did–but we also lost a really good teacher. While I may take issue with some aspects of his teaching, I have to say that he really took the job and his students’ writing seriously. In class during critiques, he raked us over the coals. When critiquing our stories outside of class, he read through each one three times, marking the hell out of them with a different colored pen each time, and then typed up a page and a half single-spaced critique (at least all of my critiques were that length, so I assume that was his standard) pointing out everything he liked that worked and everything he thought didn’t. Looking through those critiques again, I’m struck by how seriously he treated each of those stories written by a half-bright 21-year-old who, at the time, probably liked the idea of being a writer more than actually being a writer.

I learned a lot from Wallace, as I’m sure most of his students over the years did. I wish I could thank him for that.

The Saga is Complete!

All of "Those Dreadful Fairy Books" are now available wherever books are sold.February 2, 2021
Thanks for exploring Elfame with me! Our adventures are officially at an end, but maybe we'll hop into a fairy ring someday and revisit Shade, Ginch, the Professor, and all of the other dreadful fairies we've come to know and tolerate! Until then, stay tuned for news about other stories I've been working on. -Jon